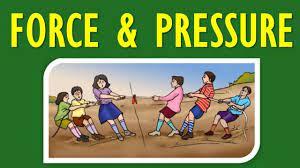 The following NCERT Solutions for Class 8 Science Chapter 11 “Force and Pressure” are offered to assist students in understanding the concepts in a straightforward manner. For scientists, the notions of force and pressure are among the most crucial to understand. It is critical that you understand every aspect of this Chapter because it contains the foundation for all of your future endeavours.

With the help of these NCERT Solutions for Class 8 Science, you will be able to achieve perfection on the chapter by supplying answers to a variety of questions such as multiple-choice questions (MCQs), fill in the blanks, match the following, true or false, and descriptive questions.

To achieve high marks in the Class 8 Science test and to fully comprehend the ideas covered in the chapter, students are suggested to extensively review the NCERT Solutions for Class 8 Science (National Curriculum Framework). Your understanding of the notion of force, its magnitude and direction, change in its state of motion or shape will be enhanced by the answers supplied here. You will also gain knowledge about the definition of pressure, and the exertion of pressure on liquids and gases.

There are numerous verbs that can be used to express the various actions involved in completing a certain activity. Every single one of these operations alters the object's motion in some way. Is it possible to substitute one or more of these terms? Let's know more:

Forces exist as a result of an interaction:

A man is standing next to a parked automobile. What will happen if he gets in the car? If the man now starts pushing the car, he is exerting force on it. When a force is applied to the car, it may begin to move in that direction. The man had to push the car in order to get it going. As a result, we can conclude that the existence of a force is contingent upon the interaction of at least two things. As a result, when two items come into contact with each other, they generate a force.

An object's mass is increased by applying forces in the same direction. It is the difference between the two forces that acts on an object, if the two forces are acting in different directions. A force can be stronger or smaller than the other, as well as equal to one another. The magnitude of a force is often used as a measure of its power. In addition, the force's direction must be specified. Changing the amplitude or direction of the applied forces can also alter the result.

The state of motion can be altered by an external force:

Taking a penalty kick in football, for example, requires the player to exert force on the ball. The ball was at rest before it was hit, and as a result, its speed was 0 mph. When a force is applied, the ball moves in a specific direction toward the goal. For example, let us imagine that the goalkeeper is attempting a diving or leaping save. The goalkeeper tries to exert some kind of force on the ball through his actions. He can stop or deflect the ball and prevent a goal from being scored with the force he uses. The ball's speed drops to 0 if the goalkeeper stops it. 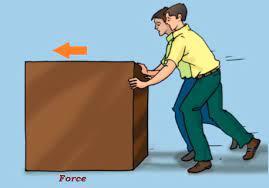 Magnitude is defined as the measurement of the applied force's strength, according to the NCERT Class 8 solutions for Force and Pressure.

The types of forces:

Muscular and frictional forces are discussed in depth in the chapter on Force and Pressure in Class 8 Science:

To describe muscular force, one must look at the use of muscles. Bulls and bullock carts are two examples of how this is done. The person's exerted muscular power is the source of all of these acts.

Since the only way two things may interact is through physical contact, this force is called a contact force.

The object's condition can be altered by friction. Moving things are always subject to frictional forces, which always act in the opposing direction of the object's motion. Using a ball as an example, this force can be shown in action. When two surfaces come into touch with each other, friction occurs.

Class 8 Force and Pressure concentrates on the notion of pressure, so let's go over it now that we've studied force. The term "pressure" refers to the amount of force exerted on a surface per unit area. As surface area drops, the pressure increases; as surface area increases, it lowers. In order to apply sufficient pressure and force, we utilise the sharp end of a nail to press it against the wall before drilling it in. 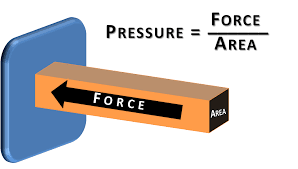 The formula for Pressure is: Force/Area

[P=F/A], where F is Force, P is Pressure and A stands for Area

It is the force of liquid and gas pressure. Gases and liquids put pressure on the containers inside walls. Pressure applied by water on a container causes it to leak, for example, if a water bottle has a hole in it. In the same way, gases exert pressure on the containers inside. With air pressure, we can inflate a balloon, but if we fail to seal the entrance, the air will leak out.

Atmospheric pressure is the name given to the force exerted by the air surrounding us. Due to the weight of gases in the atmosphere above us, we feel a heightened sense of pressure. Because the pressure in the air is the same as the pressure in our body, we are not suffocated. You may see this in action by pressing a rubber sucker to a surface, which causes all of its air to be expelled, thus it adheres because of its high air pressure.

Intense force is exerted by air pressure. Scientist Otto von Guericke from Germany performed an experiment in which he sucked all the air out of two metal hemispheres to demonstrate his point. In order to separate the globe, the scientist used 16 horses, eight on each side. However, they were unable to do so due to a lack of air and the force of air pressure.

Here are the key points to remember: