General Principles and Processes of Isolation of Elements

6.1. Which of the ores listed above may be concentrated by magnetic separation?

6.2. What significance does leaching serve in the extraction of aluminium?

Ans: Leaching or chemical separation is a very effective way to cleanse bauxite, an aluminium ore with iron oxide impurities. The impurities are removed from the ore by leaching it with a concentrated solution of NaOH to generate a soluble complex. 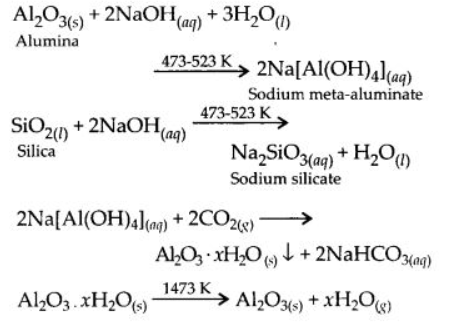 is thermodynamically feasible as is apparent from the Gibbs energy value. Why does it not take place at room temperature?

Ans: The equilibrium constant, Keq, has been used to explain this. Since all reactants and products are solids at room temperature in the given redox reaction, there is no equilibrium between them, thus the reaction does not occur at RT. Cr melts at high temperatures, and TAS values rise. As a result, the value of

6.4. Is it true that Mg can reduce Al203 and Al can reduce MgO under specific conditions? What are those circumstances? 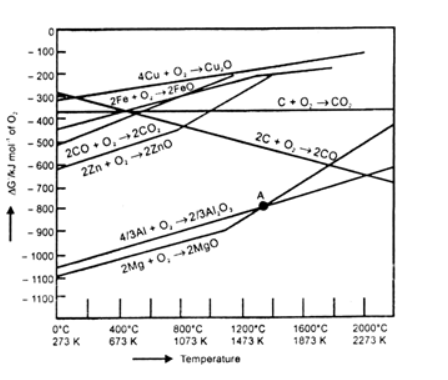 Fig. Gibbs energy (ΔG°) vs T plots for formation of some oxides.

6.1. Hydrometallurgy can extract copper but not zinc. Explain.

Ans. Copper can be extracted by hydrometallurgy but not zinc, this is because

lower than that of

Hence, zinc can displace Cu from solutions of Copper(2+) ions.

. A more reactive metal, such as,

is required to displace zinc from zinc solution. However, with the generation of H2 gas, these metals (Al, Mg, Ca, and K) produce their respective ions.

As a result, Al, Mg, Ca, K, and other metals can't be utilised to remove zinc from a solution, and hydrometallurgy can only extract copper, not zinc.

6.2.How does a depressant affect the froth-floatation process?

Ans: Depressants work by preventing one type of sulphide ore particle from creating froth with air bubbles. NaCN is used as a depressant to separate lead sulphide (PbS) ore from zinc sulphide (ZnS) ore.On the ZnS surface, NaCN generates a zinc complex, Na2[Zn(CN)4], which prevents the development of the froth.

At most, lead sulphide develops froth in this setting, allowing Zinc sulphide ore to be separated.

6.3. Why is it more difficult to extract copper from pyrites than from its oxide ore by reduction?

Ans: (i) Zone refining: This procedure is used to make semiconductors and other high-purity metals such as Ge, Si, B, Ca, and In.

It works on the idea that impurities are more soluble in the molten state (melt) of the metal than they are in the solid form.

A revolving circular heater heats the impure metal in the form of a bar at one end. The pure metal crystallises out of the melt as the heater is progressively pushed along the length of the rod, while the impurities flow into the neighbouring molten zone. This operation is continued until all of the contaminants are driven to one end of the rod, which is then cut off and discarded.

(ii) Chromatography: Chromatography is based on the idea that distinct components of a mixture are adsorbed to different degrees on an adsorbent.

An adsorbent, such as alumina (Al2O3) or silica gel, is packed in a column in column chromatography. This marks the beginning of the stationary period. The separated mixture is dissolved in a suitable solvent (mobile phase) and applied to the column's top. With the use of a suitable solvent, the adsorbed components are removed (eluted) from the column (eluent). A component that is more strongly adsorbed on the column travels through the column more slowly than a component that is lightly adsorbed. As a result, as the mixture travels through absorbent media, the individual components of the mixture are separated (stationary phase).

Ans: This can be explained thermodynamically by taking into account entropy and free energy changes.

Ans. Case (i): Volume of CO2 produced = Volume of O2 used. Therefore, ΔS is very small and ΔG does not change with temperature. Therefore, Plot of ΔG vs T is almost horizontal. 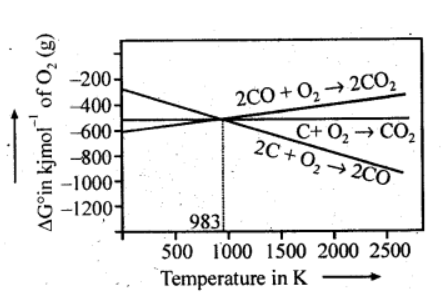 The lines for the reactions C ——–> CO2 and C ——–> CO intersect at 983 K, as shown in the G° Vs T plot (Ellingham diagram). The reaction (a) is more energetically favourable below 983 K, but reaction (b) is more favourable and preferred above 673 K. Thus, both C and CO can function as a reducing agent below 673 K, but because CO is more easily oxidised to CO2 than C, CO is a more effective reducing agent than carbon below 673 K.

6.6. Identify the common elements found in anode mud used in copper electro-refining. Why do they seem to be everywhere?

Ans: Anode mud comprises metals that are less reactive than Cu, such as Ag, Au, and Pt. Despite the fact that they make up the electrode that serves as an anode, they are unable to release electrons. While the entire copper present participates in the oxidation half process, all of these metals are left as residue under the anode (known as anode mud).

6.7. Write down the reactions taking place in different zones in the blast furnace during the extraction of iron.

Ans: The reduction of iron oxides in the blast furnace occurs at various temperatures, as indicated below. 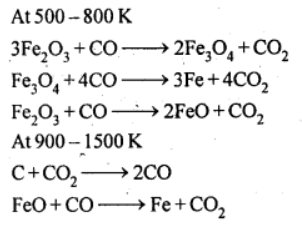 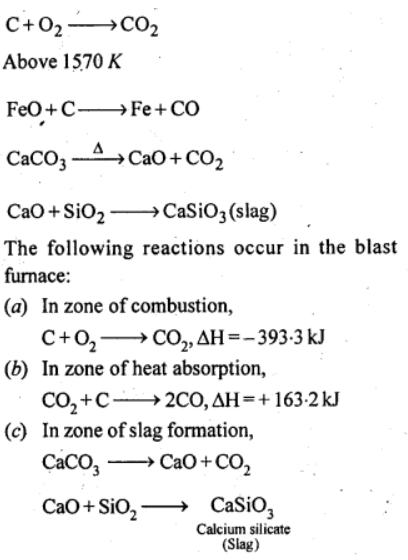 6.8. Describe the chemical reactions that occur during zinc extraction from zinc blende.

Ans: The extraction of zinc from zinc blende includes the following steps:

(i) Concentration: Zinc blende ore is crushed, and concentration is achieved using the froth-floatation method.

(ii) Roasting: The concentrated ore is then roasted at around 1200 K in the presence of excess air, resulting in the formation of zinc oxide.

(iii) Reduction: Zinc oxide is combined with powdered coke and heated to 1673 K in a fire clay retort, where it is reduced to zinc metal.

(iv) Electrolytic refining: The anode is impure zinc, whereas the cathode is pure zinc strip. Acidified ZnSO4 solution with dil. The electrolyte used is H2SO4. Pure zinc is deposited on the cathode when an electricity passes through it.

6.9. Describe the role of silica in copper metallurgy.

Ans: In copper metallurgy, silica (SiO2) functions as an acidic flux, combining with FeO (the major impurity) to generate FeSiO3, which is a slag.

6.10 What does the term "chromatography" mean?

Ans: Chromatography is a process for separating, purifying, identifying, and characterizing the constituents of a mixture, whether coloured or colourless. Also because procedure was first used to separate coloured compounds (plant pigments) into specific components, the term chromatography was derived from the Greek words 'chroma' meaning colour and 'graphy' meaning writing.

Be an MSVgo Champ. Hear what our Champs have to say. Play on the msvgo app - for games & msvgo Interschool Challenge