Human Physiology is an important topic in biology and is an essential subject that is covered in the Class 11 curriculum. The topics include Digestion and Absorption. We also cover chapter 16, class 11th Biology NCERT solutions here.

Digestion and absorption are critical topics in biology that have a vital role in the NEET exam. In this section, we will cover topics like the digestive system, digestion of food, absorption of digestive products, and disorder of the digestive system. In the following article, you will find most answers related to Digestion And Absorption Class 11 NCERT Solutions.

Class 11 Digestion and Absorption is an important chapter that requires deep understanding. We have tailored our class 11 Biology NCERT Solution Digestion And Absorption to meet the student's requirements. In this chapter, many aspects of digestion and absorption are explained.

Topics to be covered in this Chapter (Content Table)

All living organisms require energy and organic materials for the growth and repair of tissues that come from food. Food has carbohydrates, proteins, and fats that provide energy. Digestion is the process that breaks down macromolecules in food and converts them to energy in the digestive system. In this process, complex food substances are converted into simpler absorbable forms by our digestive system through mechanical and biochemical methods. Water plays an important role in the metabolic process and also prevents the human body from dehydration.

In other words, digestion is a cycle by which the components of food are broken down and converted chemically to be consumed by the cells of the living being and used to maintain necessary bodily function. The human digestive system general organization is shown in the figure below:

The human digestive system consists of the associated glands and the alimentary canals.

The Alimentary Canals begins with the mouth- an anterior start point that opens the posteriorly via the anus. The mouth then leads to the oral cavity, which has several teeth and a muscular tongue.

Thecodont: It is a type of attachment where each tooth is fixed in a socket of a jaw bone.

Diphyodont: Many mammals, including human beings, have two different sets of teeth during their lifetime, i.e. temporary milk teeth and permanent or adult teeth. Diphyodont is a dentition where permanent teeth replace milk teeth.

An adult has 32 teeth which are four different types namely: incisors(I), Premolars(PM), Canine(C), and Molars(M). Dental Formula is that each half of the upper and lower jaw has no. of teeth -  2123/2123

Digestive Glands include The Salivary Glands, Liver, and Pancreas.

Salivary Glands: saliva is produced by the salivary glands that have three pairs, i.e. cheeks (the parotids), lower jaw (the submaxillary), and below the tongue (the sublingual).

Liver: It is the biggest gland in the human body that is situated just below the diaphragm in the abdominal cavity. It has two lobes: Hepatic are functional and structural units of the liver that contain hepatic cells. The thin connective tissue sheath, Glisson's capsule covers each lobule. The secretion is concentrated and stored in the gallbladder. The pancreatic duct and bile duct together open into the duodenum, which is guarded by a sphincter, also known as the Sphincter of Oddi.

The Pancreas: The pancreas is a long compound organ present between the Limbs of the Duodenum. Its exocrine portion discharges an alkaline juice that contains enzymes, while the endocrine discharges insulin, hormones, and glucagon.

Absorption is the process by which the digested products pass through the intestinal mucosa into the lymph or blood. Then, it is carried out by passive, facilitated, and active transport mechanisms. Glucose, fructose, fatty acids, glycerol, amino acids, and other nutrients are absorbed into the bloodstream and rest of the left water, and other minerals are absorbed in the large intestine.

TABLE 16.1 The Summary of Absorption in Different Part of Digestive System

The inflammation due to bacterial or viral infection that is caused by intestine like tapeworm, roundworm, threadworm, etc

Here are the class 11 Biology NCERT Solution Digestion And Absorption. 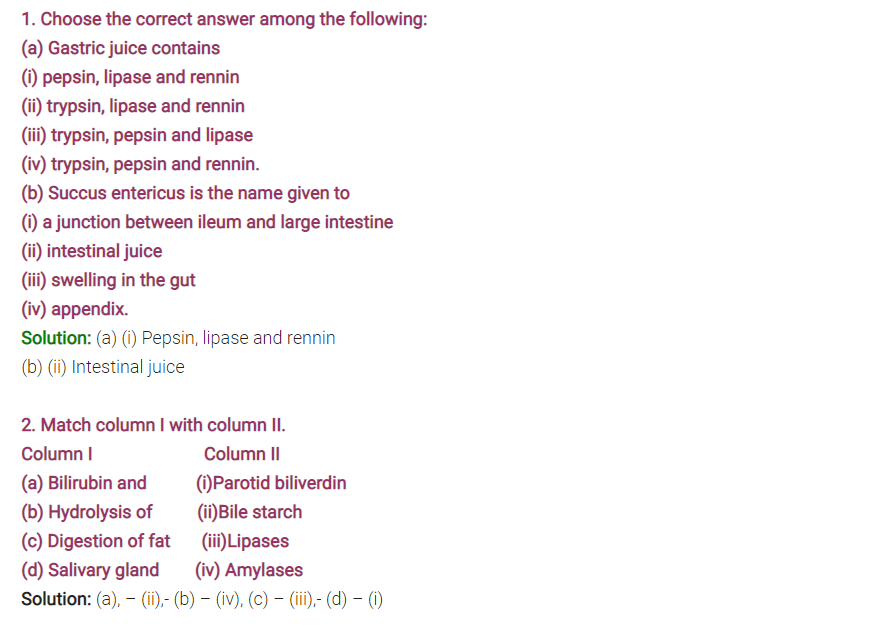 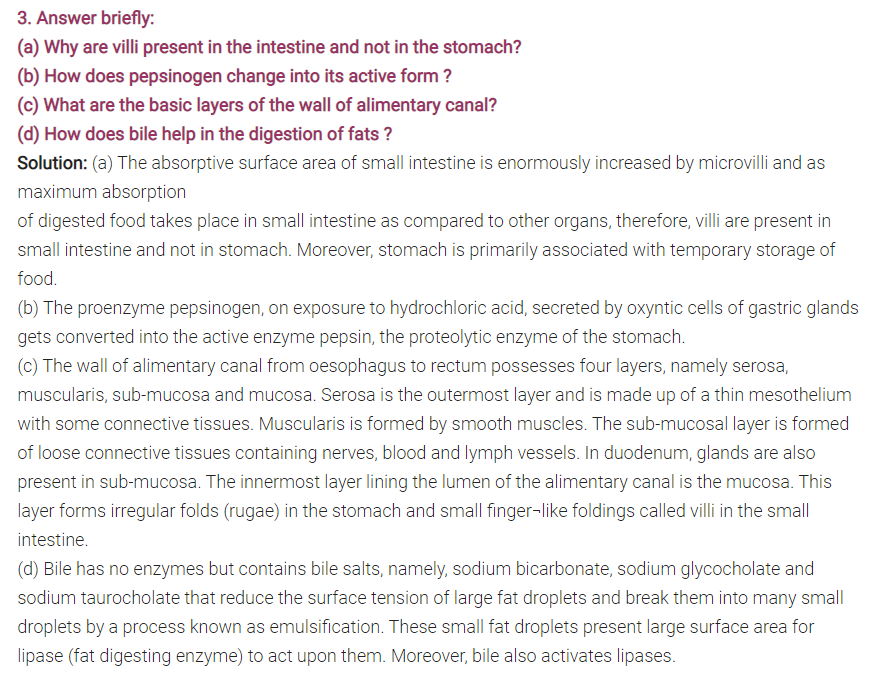 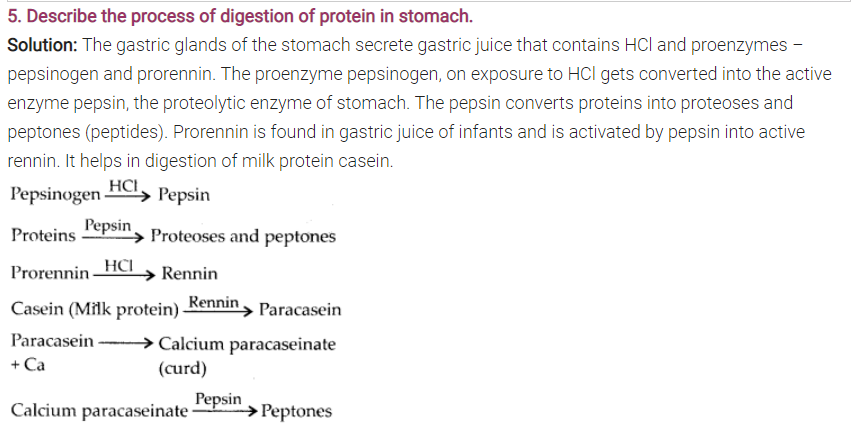 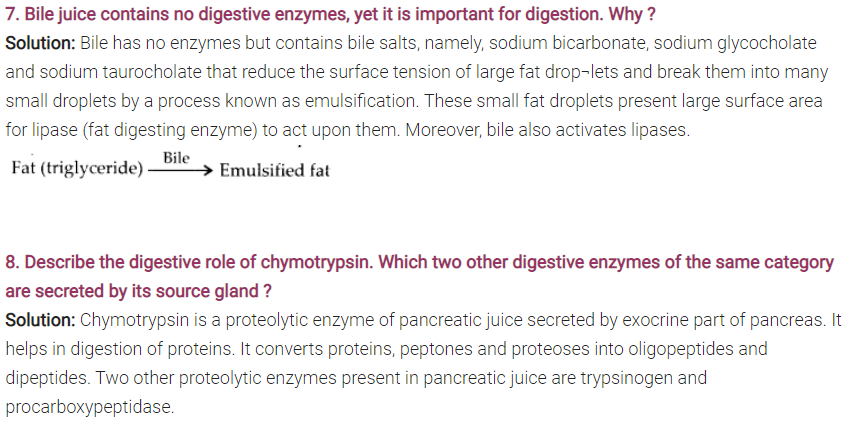 1. Explain the process of digestion of protein in the stomach.

The digestion of protein starts from the stomach and finishes in the small intestine. When food enters the stomach, it gets mixed with the gastric juice, which is discharged through the gastric glands on the walls of the stomach and becomes acidic. Hydrochloric present in the gastric juice dissolves a bit of food to create an acidic medium which assists the pepsinogen to convert into pepsin, an oesophagus digestive enzyme. When it is discharged it is inactive, and it is activated by hydrochloric acid. The pepsin after activation then transfers the proteins into peptides and proteases.

Rennin has a vital role in the milk’s coagulation and is released in an inactive form called prorenin.

2. Describe the functions of the liver.

The function of the liver is to discharge digestive juices and bile that plays a major role in the emulsification of fats.

3. What is the digestion of food?

Digestion of food is a mechanical and chemical process that accomplishes the process of digestion in the body. Digestion turns the food you eat into nutrients that the body utilizes for energy, growth, and cell repair needed to survive. It also involves the elimination of digestive waste.