As we all know that Science is incomplete without Chemistry. It gives life and soul to Science. It explains all the reactions and molecules in the environment, right from a tiny atom to everything else. Redox Reactions form a significant part of this that tries to explain the oxidation and reduction reactions that take place in the environment around us.

Often students try to surpass this chapter, making it difficult to find the NCERT Solutions for Class 11 Chemistry Chapter 8. However, to clear your doubts, Redox Reactions is one of the most important chapters of Class 11 Chemistry. Several questions are asked from Class 11 Redox Reactions every year. Moreover, the redox reactions also find a special place in Biology and will help you understand many terms in that subject as well.

We have created a list of all the important and frequently asked terms from the Class 11 Chemistry Redox Reactions chapter for your convenience. In this way, you'll have deep insight into all the simple as well as complicated terms included in this chapter. That will help you find Redox Reactions Class 11 NCERT Solutions. As you may already know, most of the questions are directly asked out of your NCERT textbook, makings the Class 11 Chemistry Chapter 8 NCERT solutions all the more important.

Let's have a step-by-step look at all the important and noteworthy terms of this chapter.

Before we get into all the details of the Class 11 Redox Reactions, we must understand the basics of the same. Before our foundation is strong, we can't build anything over it. Henceforth, let's understand the simple terms known as redox reactions.

What are redox reactions?

As the name suggests, redox reactions can be broken down into two: reduction and oxidation. Any reaction where both the processes take place simultaneously is known as a redox reaction. It also means that this reaction involves the gain or loss of electrons concerned with the oxidation and reduction processes.

A redox reaction is made of two equally important parts. They are:

There are various types of redox reactions. Some of them are:

According to the electronic concept, every redox reaction is completed in two steps known as half-reactions.

Now, if we look further: 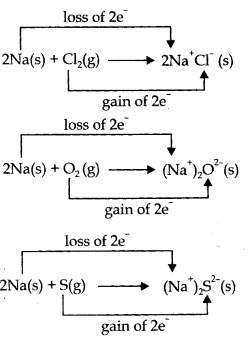 It is defined as the individual charge present on one atom when all the other atoms are completely removed.

The important points that help in determining the oxidation number of any element are:

It can be calculated after knowing the structure and bond position well.

(i) By using the oxidation number method

It can be done by the following steps:

(ii) By using Half Reaction Method

For this method, two half-reactions are considered. Then, they are balanced separately. Then they can be added together to yield a balanced reaction. 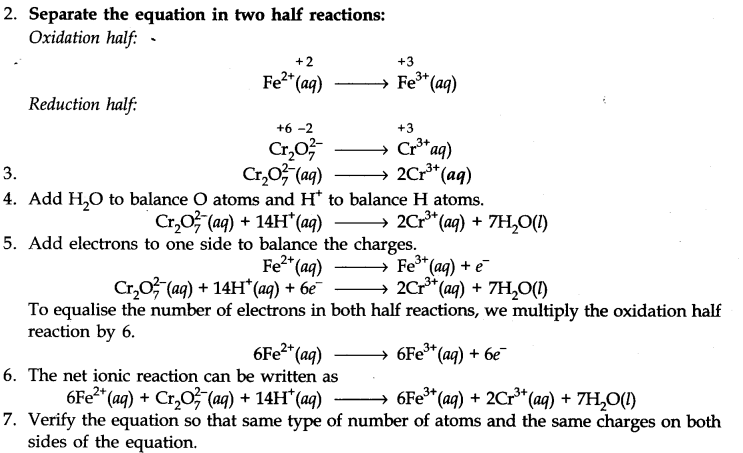 Electrochemical Cell: A device where a redox reaction is carried out indirectly so that the decrease in energy is yielded as the electrical energy is known as an electrochemical cell.

In a copper sulphate solution, a zinc rod is dipped. A redox reaction starts taking place here. We see that zinc is oxidised to Zn2+ ions. On the other hand, Copper is reduced to metal which was initially Cu2+ ions.

1. What is meant by redox reaction?

A reaction wherein both oxidation and reduction processes take place simultaneously is known as a redox reaction.

2. List out the important topics covered in this chapter.

3. What is an Oxidation Number?

It is simply the oxidation state of an element in any compound. In simple words, it is the charge obtained by gaining or losing electrons.